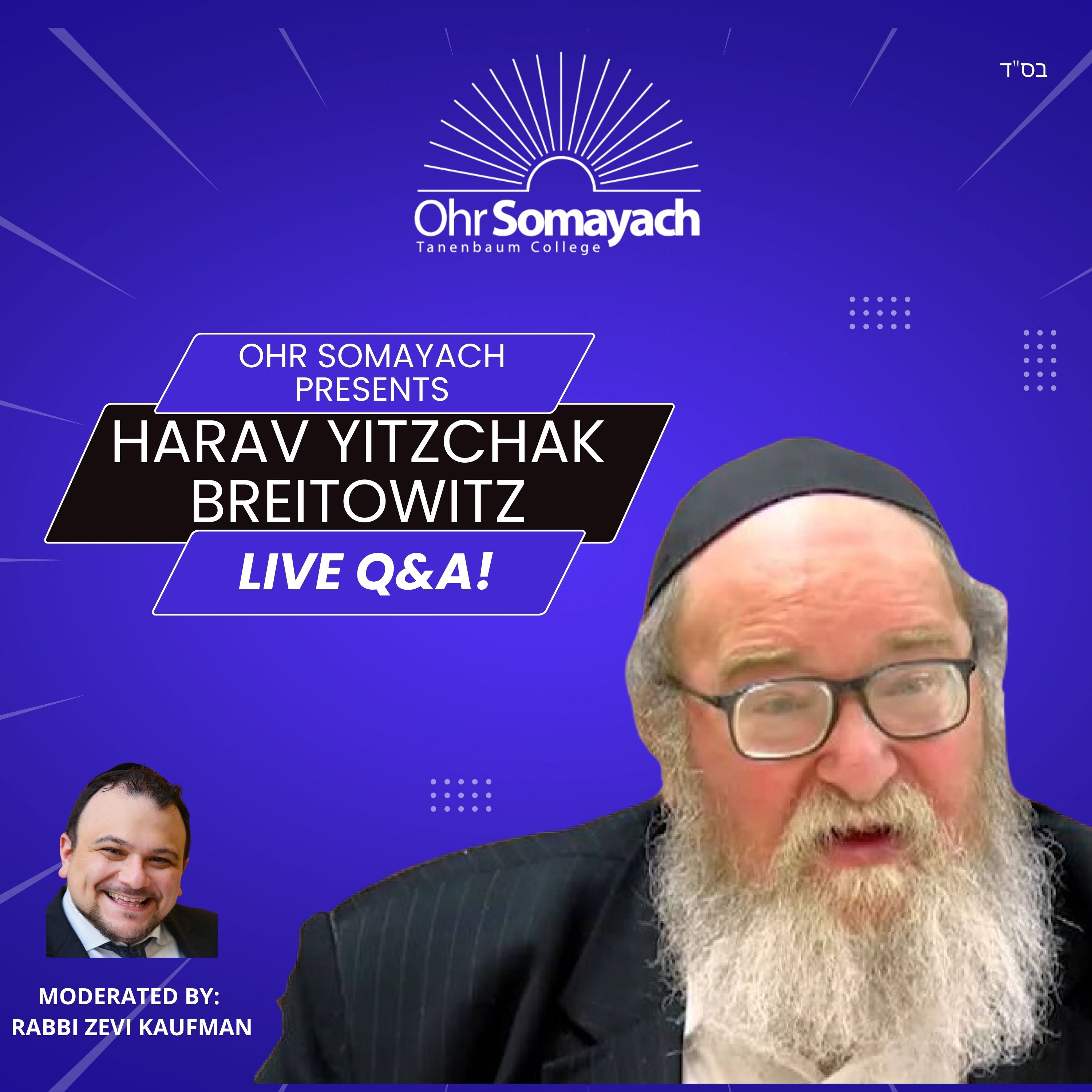 Dedication opportunities are available for episodes and series at ohr.edu/donate/qa

4:00 - What exactly constitutes a “ben Eretz Yisrael” vs. “ben Chutz l’Aretz” for how many days of Yom Tov to keep?

9:06 - Is there any source for the idea that religious jews need to have marital relations through a hole in the sheet?

11:03 - When we left Egypt, what happened to the Mixed Multitude and why were they not included in the census?

15:30 - There is a biblical obligation to listen to the Rabbis. It would seem that when a Rabbi says something, it would have effect of torah law. So when a person doesn’t turn in high school homework on time, that would be a biblical violation. How much agency is a person allowed to have? If I’m a Trump guy, can a rabbi force me to vote for Biden? Can he tell me who to marry or not to marry? How does this work in practice?

25:42 - On the pasuk in Devarim where Moshe is describing that it was his decision to send the meraglim into Eretz Yisrael, and many meforshim comment that this seemingly contradicts the earlier description of the story where it was Hashem’s decision. I recently read the Abarbanel’s description where he seems to say that he was deliberately lying because he didn’t want them to turn against Hashem since this episode caused the entire generation to perish in the midbar. How can the Abarbanel make this interpretation that Moshe was lying? In other contexts we might have said it came from a reform rabbi. How does he have the authority to do this, and why is it not a problematic thing to say?

30:35 - Why is kilayim a seemingly unique mitzvah in that we are not allowed to make it but we can benefit from it, unlike kashrut, shatnez, etc.?

34:23 - From the Hasidic community where a lot of women shave their hair, which became an attack against the Orthodox community, what is the Rav’s take on the concept [of shaving]? If someone grew up with that Mesorah, would they be allowed to change such a thing?

38:17 - Could the Rav give some insight on the covid vaccines, vaccines in general, etc.?

43:44 - Are observant Jews allowed to eat in non-kosher certified, but strictly vegetarian restaurants, assuming one is not eating leafy vegetables for example?

46:53 - About the Gemara in Chagigah, could Elisha b. Avuyah (“Acher”) done teshuva? How are we to understand the Gemara’s aftermath of his death where R’ Meyer and R’ Yochana see smoke and fire rising from his grave?

53:05 - What are the parameters for what a person can use their maaser ksafim, their tithe? Specifically, can one give out money to Israeli soldiers as it might be good for Haredi public relations?

56:50 - How did Tumas Niddah work during the times of the Beis HaMikdash? When a woman, married or unmarried, became a Niddah, and everything she touched became contaminated, how would that work? How did life look?

1:08:02 - How is someone who would want their children to grow up in Israel, are there options, are they allowed to have hobbies, are they encouraged, what is the move for such parents? Is this a system they should try and fit their kids into, or are there other things they should be exploring?

1:14:24 - Are non-misdemeanor traffic offense a chillul Hashem if one can pay the fine without needing to appear in court?

1:17:49 - Should terrorists receive the death penalty?

1:20:05 - Is it permitted to daven for something you want but that, if it happens, it could be dangerous?

1:22:37 - Are there any ways to validate the “flat-Earth” view from the Torah or are there any Torah personalities that took such a view?

1:25:45 - How should bnei Torah look at the Pope, Dali Lama, or other religious figures who seem to be doing great things for the world or at least their communities but are likely worshiping idols, not ones that are evil or in context of their relationship with the Jews but promoting good things for the world?

1:30:23 - (Follow up) Would Jews living their Judaism as superficially as [only the practices of their forefathers] be lacking in a certain way, or is it different?

1:32:27 - Regarding teshuva, in general, how does one begin, and specifically, how does someone do teshuva or get a full tikkun for wasting seed? What about someone who had a relationship with one of the prohibitions, arayos or a niddah?

1:36:33 - What advice does the Rav have for children, or parents of children, who just can’t seem to wake up in the morning for minyan?